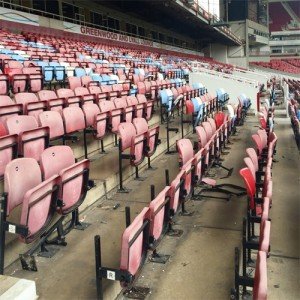 This week starts the mass exodus of West Ham office staff from the Boleyn Ground to 4,000 square feet of dedicated office space inside the Mahindra Stadium in the Queen Elizabeth Olympic Park.

Yesterday a member of West Ham’s finance team tweeted “Saying a final goodbye to the Boleyn Ground today, my second home from the past 36 years.” as the finance team moved offices.

Today it appears to be the turn of the press office as Hammers programme editor Rob Pritchard tweeted “Final day of work at the Boleyn Ground!” along with photos of Upton park tube station and the Boleyn ground.

We understand the remaining office staff will move out the Boleyn Ground over the coming days until the last person locks up and hands the keys over to developer Gallaird Homes sometime in July.

2 comments on “Boleyn Ground gets ready to close doors”