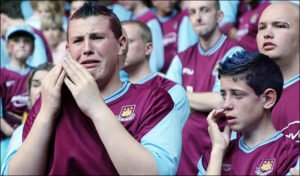 West Ham odds of being relegated have been slashed to 4/1 by bookmakers down from 12/1 at the beginning of the season.

Watford and Norwich City are now odds on for the drop at odds of 1/4 but the third relegation place has a range of possible teams in the frame.

West Ham and Bournemouth are joint fifth on 4/1  with Newcastle and Burnley joint sixth both at 5/1.

The Hammers have dropped down to 16th place in the Premier League table  this weekend just one point off Southampton in 18th place in the relegation zone.

However, the Premier League is so tight that a win over Arsenal on Monday night could put West Ham eleventh just behind Arsenal in the tenth spot.

With Aston Villa and Southampton yet to play on Sunday West Ham could slip further down the Premier League table before Monday finishing up in 17th or 18th position before kick-off at the London Stadium next week.

One comment on “Bookies slash odds on West Ham relegation”