Boss reveals the road to success over Chelsea 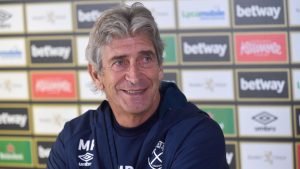 Manuel Pellegrini has told his squad they need the same level of performance at home as away if they are to take Chelsea’s notable scalp on Sunday.

It’s almost a cliche but confidence he declares has to be the key – the knowledge that they are capable of playing at home as the team did at Everton.

He said:”Every game is different in the Premier League. We must be confident that we can play at home or away in the same way that we tried to do in the last game.

We need to concentrate in defence, because they have very good players that can make the difference in small spaces. But I am confident that our team can play a good game.”

The growing relationship between Diop and Balbuena will be another vital factor in a game which truly could set the Irons on their way this season.

With a strong midfield three performing as they did at Everton all things are possible on Sunday.

2 comments on “Boss reveals the road to success over Chelsea”