The Athletic reports that Jarrod Bowen’s injury is worse than first feared, meaning that he could face a race against time to be fit to play Lyon in the Europa League quarter-finals.

The winger appeared to be in line for an England call-up due to his fine form but the injury he sustained against Liverpool has scuppered that. 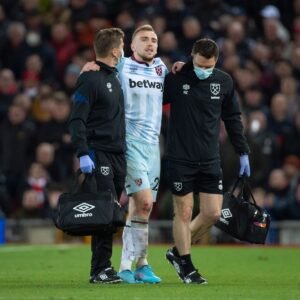 The new report claims that Bowen has fractured a bone in his foot and the ex-Hull winger could now miss the encounter against Lyon in the quarter-final.

That game is scheduled to take place on April 7th, after the Premier League encounter with Everton.

The Hammers’ next few games come against Everton, Lyon, Brentford, Lyon, Burnley and Chelsea, and it is not yet clear when Bowen will be back in action.

It is a major blow for the Irons, who were dealt a setback in their bid to qualify for the Champions League on Sunday, as they were beaten 3-1 by Spurs.