Bowen: “Fans say everything about this club”

He could barely believe the a total of two and a half thousand of them made their way to south west London for a friendly.

The number 20 is returning to his very best and grabbed his second goal in three mid season games.

Afterwards he made it clear that he reckons that just as the fans are absolute class the players now have to show the same quality on the pitch. 88 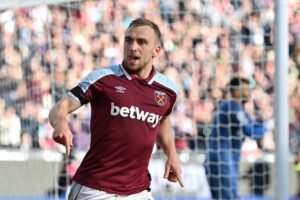 He said: “We have the preparation in the bank. It is down to us now to go to Arsenal on Boxing Day and put in a really good performance.

“[Fulham] was a really good test, Udinese was a good test, as was Cambridge in the freezing cold. But we have come out of all the games really well. We have looked dangerous as well and today was a really important one in terms of what we going to be going back to face.”

When Bowen found the net at Craven Cottage on 62 minutes, he did so in front of more than 2,500 Hammers, who sound tracked the action in west London.

The Hammers faithful roared their side on as Tomáš Souček and Craig Dawson went close in the closing moments, although a sequence of stops from Fulham goalkeeper Marek Rodák ensured a share of the spoils.

Soucek said: “Someone said to me before the game that we had 2,500, and I thought no way for a friendly,” he explained. “But that says everything about this Club and the heart of this Club.

“We know what position we are in. We can’t hide away from that. It is about us as players now stepping up and showing what we are about.”