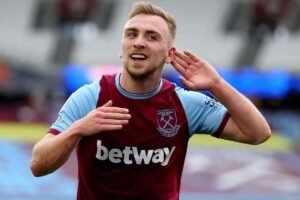 David Moyes is set to make a late decision on Jarrod Bowen’s fitness for the weekend game against Everton.

Hopes remain the No 20 will be fit to make it but there is no certainty and the manager will be watching his training ground progress carefully over the next few days.

Bowen bruised his heel badly in the match against Liverpool and despite nothing else showing on two separate scans there have been fears he has suffered hairline cracks to his foot.

However, he’s been training and the club are clearly remaining tight lipped about his possible involvement against Frank Lampard’s outfit in what is a crucial game for the seventh placed Hammers as they bid to maintain their place at the top end of the table.

A Hammers source – speaking to ClaretandHugh – made the position clear on the 12 goal front man who has 39 appearances to his name this season.