Brady refuses to give up her Sun column 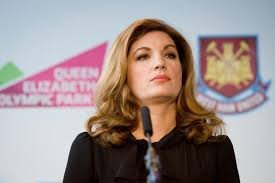 West Ham Vice-Chairman Karren Brady has refused to consider giving up her Sun newspaper column insisting it was a decision only for her to make. Representatives of the West Ham Groups United asked her to give up her column in the Sun which they claim she refused point blank to even consider.

Supporters at yesterday’s meeting pointed out that her comments with regards the Leicester City Chairman in the newspaper football diary feature prevented West Ham from signing one of their striker targets in the January transfer window.  Brady said she had apologised to the Leicester City chairman and noted concern relating to anything West Ham in her column but refused to stop writing her tabloid column which she has been doing for the past 11 years. She told the meeting’s attendees it was her decision alone to make.

A comprehensive summary of the West Ham Groups United four hour meeting with Karren Brady can be found at KUMB.com at http://www.kumb.com/article.php?id=4118

5 comments on “Brady refuses to give up her Sun column”