Brady’s new war of words …this time on Twtter

Karren Brady has been defending herself on social media after being drawn into a row on her earnings insisting that she has taken a 30 per cent pay cut to her £898,000 salary to ease the financial burden on West Ham United.

Below you can follow to to-ings and fro-ings of her face-off with her opponent who was particularly keen to involve her in a confrontation in which she goes into some detail about her salary. 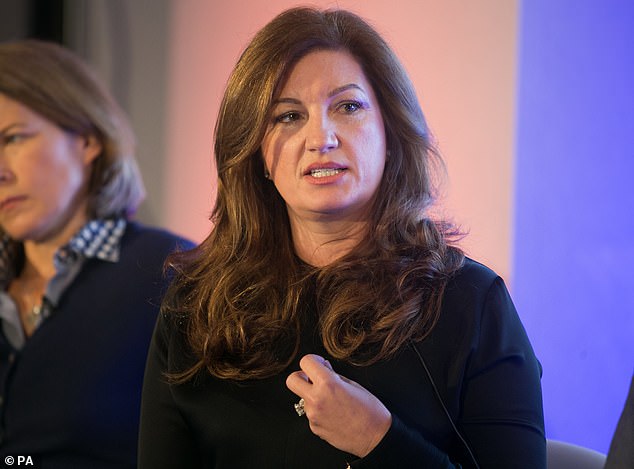 With no date for restarting the league, this is having severe financial implications,’ she had written.

‘Bearing in mind the majority of the broadcast revenue goes to pay the players’ wages it is unthinkable that the PFA don’t seem to understand this.

‘They seem to suggest that the players taking a pay cut means the money somehow goes into the owners pockets which is totally ridiculous.’

Her stance was called into question by one user, and Brady felt the need to respond after being asked if she was taking a cut herself and being told that her ‘hypocrisy was mind blowing’.

‘Yes I am,’ she responded. ‘Reduced by 30% so I can help ensure my staff are paid 100%. What about you?’The West Ham vice-chair has slammed the PFA for their stance during the coronavirus crisis

The user @johnopenfold hit back again to ask: ‘So you’re still taking approx £700k for a part time job that you’re not very good at then?’, to which Brady responded by refuting the suggestion her wage is that high.

‘My basic salary is NOTHING like that amount,’ she argued, ‘but even if I was I pay 50% tax on it so I can contribute to the country, the NHS and everyone who needs it, including possibly you.’ 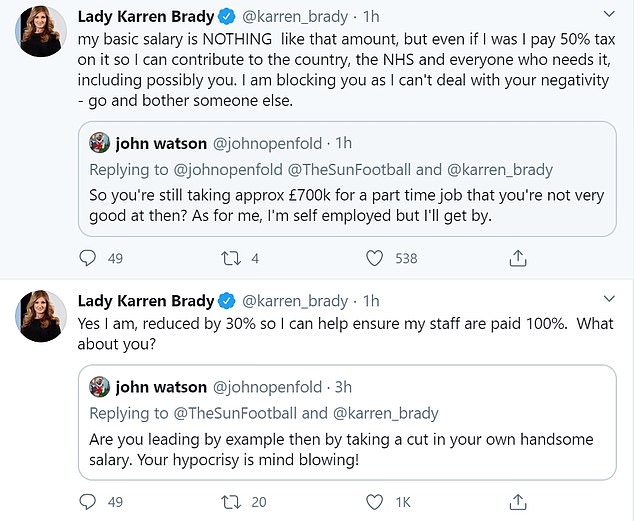 ClaretandHugh says: We’ve had plenty to say about Karren Brady’s wage levels in the past and we retract none of it. However, to use a well worn cliche “it is what it is” and she has the right to point out she is doing her bit by taking a 30 per cent cut on what is of course an astronomical salary in the view of mos people who are probably doing well to earn £25 – £30k a year. She could – like some the players – have said she would prefer to give it to charity!  However, truth is to allow herself to be drawn into a war of words on Twitter of all places seems a bit naive and overly sensitive. When you are earning those sort of numbers it’s very hard indeed to put yourself up there among the good guys and once again it simply projects  West Ham name into the limelight of a scenario which in all honestly it is well out of. Sometimes silence is golden Karren.
Permalink