Posted by Sean Whetstone on August 30, 2020 in News, Whispers 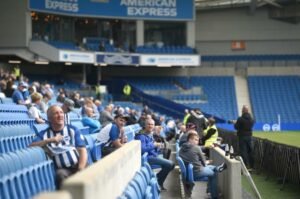 Football fans returning to the Amex stadium for the first time in six months have been described as “magnificent” for following new safety guidelines.

Brighton and Hove Albion deputy chairman and chief executive Paul Barber had high praise for spectators after a pre-season friendly match between Albion and Chelsea.

He said: “Our fans have been incredible. Everyone was wearing masks and they religiously followed the signage. They realised they had a lot of people watching them and they have set a good example. I’m very grateful to them – they were magnificent.”

A range of new safety measures were put in place, including a socially distant seating plan in the upper and lower sections of the East and South Stands, hand sanitising stations and a face mask rule within the grounds.

Random temperature checks were also carried out, with fans’ details stored through the government’s track and trace system.

Mr Barber added: “Scaling up is going to be the biggest challenge. As they stand, the guidelines work well for 2500 people.

“When we move to much bigger crowds and all four sides of the stadium is open, the more complex the process becomes.

“We are designed to operate at full capacity but we simply have to adapt.”

ClaretandHugh understand that the London Stadium is under consideration for a test event like Brighton although permission is yet to be granted.