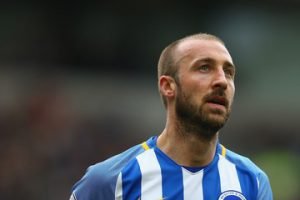 Brighton striker Glenn Murray has warned his team-mates that Mrko Arnautovic “is  a fantastic player and he’s shown that at West Ham.”

As we prepare for the game against the south coast outfit on Friday evening the 35 year old striker said: “He almost carried the team at stages last year and he showed what a top quality player he is.

“He’s set off again in the same vein of form that he ended last season. He is the danger man and we’ve got to try to keep a lid on him.”

Murray added: “I don’t think it will make any difference playing first but we have got good memories of the Amex on a Friday night under the lights.

“The crowd’s always big and loud and creates a very good atmosphere.

“On a Friday night I think everybody’s a little bit more excited. It’s the first day of the weekend, everyone’s finished work, and we’ve had good nights. Hopefully we can have another one.”

Murray, was rested from the starting line-up for Saturday’s 2-0 defeat by champions Manchester City at the Etihad before replacing Jurgen Locadia  into the second half.

“I was fit and ready to go,” Murray said. “I want to play every game but I respect his (manager Chris Hughton’s) decision.

← No jolly boys outing but Irons fans expect beside the sea!
Hammers put January shutters up →
Click Here for Comments >