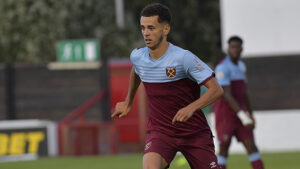 West Ham’s academy is doing very well right now but there seems to be an expectancy among some which frankly is unrealistic.

This became particularly noticeable when we were hit by injuries towards the end of last season and we saw more and more youthful names appearing on the bench.

And there were of course those who were shouting for the lads to be given their outings with Conor Coventry a regular name off their lips.

There were others – notably striker Mipo – but the reality of that was put into sharp focus by Ben Johnson’s various appearances.

Ben did very well at times whilst showing natural inexperience in some games but for us but to have produced him and of course Declan plus an £18 million departure in Grady Diangana in the two or three years is a decent performance.

Premier League Division One is a million miles away from the Premier League itself and it’s why many are sent out on loan to the Championship to get regular quality first team football.

We have to trust the manager and his coaching staff to decide who is ready and when!

The next 18 month is going to be a telling time as will this summer when we could find that the once very highly rated Nathan Holland at rising 23 and 24 year old Xande Silva are retained.

8 comments on “Bring in youngsters pleas a false reality”