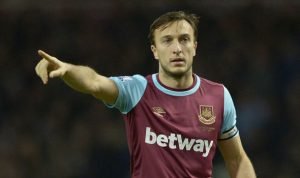 Mark Noble is more than happy with the Hammers opening fixture of the new season at Liverpool.

Speaking after the Hammers programme for the new campaign became apparent he said: “Playing  at Anfield is always special and everyone always looks forward to the opening game of the new season, so it should be a really good occasion for everyone

“Liverpool away is always a tough game and they’ll be keen to get their season off to a winning start, particularly as it’ll be their first home match since the Champions League final, but we will also want to make a positive start, so we’ll give everything and hopefully we will put in a good performance.

“We’ll be playing under Manuel Pellegrini for the first time, so all the lads will want to do their best and show the new manager what they can do. For me, Liverpool away is a really exciting game to start the season.”

West Ham’s will be at home for their first game against Bournemouth and Noble added: “It’s no secret that home form is vital for every team’s success and it’s no different for us.

“Our results at London Stadium were good during the second half of last season and we want to pick up where we left off when we play against Bournemouth.

“We know it won’t be an easy game, as they never are against Eddie Howe’s team, but we will have a capacity crowd behind us and we’ll be confident of taking the three points. See you there!”