Chelsea striker Armando Broja has been pictured in a protective boot after sustaining an injury in pre-season training.

The Blues star has been identified as a key target for boss David Moyes this summer. 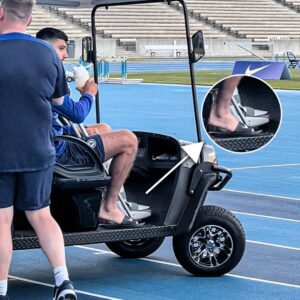 The Hammers are also trying to tie up a deal to sign Sassuolo striker Gianluca Scamacca, having been reported as tabling  a bid for the ace.

Broja has been near the top of the shortlist throughout this transfer window but he has now been seen nursing a potential anjle problem.

Chelsea boss Thomas Tuchel wants to take a close look at the Albania international during their pre-season tour in the US but his injury issues could provide a blow.

We understand the protective boot is a precautionary measure but the image is still enough to spark some concern in both boardrooms!

Broja has yet to make his first-team breakthrough at Chelsea but they have loaned Romelu Lukaku back to Inter Milan this summer so a spot may be available.