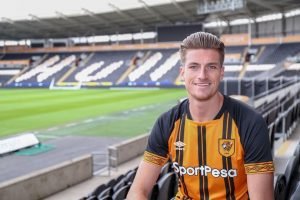 Reece Burke has joined Hull City on terms some way short of the reported £1.5 million.

The young centre back completed his move yesterday but at a third of the cost quoted in national press reports.

In fact the fee Hull will eventually pay out for the central defender is around £500k which includes games played and promotion clauses.

The Hammers also have a 20 per cent sell on fee involved in the deal.

On joining the Tigers Burke said: “I’m over the moon to have signed for Hull City. “I think it’s about time I left West Ham and kick-start my career so I’m looking forward to it.

“I’ve had a good chat with the manager to be fair and that got me a bit but other than that I know that Hull were really keen on me and it’s nice to go somewhere where you are loved.

“Obviously I want to play football and get as many games as I can, just push on and show people what I’ve got and as a club hopefully we can push on and get to where we belong.”

Burke will now travel out to Portugal to meet up with his new teammates at the club’s warm weather training camp, having left West Ham’s in Switzerland last weekend.