Posted by Sean Whetstone on October 1, 2014 in News 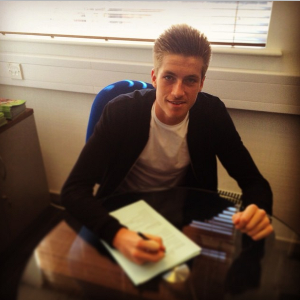 West Ham United have announced that Reece Burke has signed his first professional contract with the Club after previously attracting interest from Chelsea, Manchester United and Arsenal.

The 18-year-old defender has already made two appearances for the first team, and has now signed a contract which will keep him at the Boleyn Ground until 2017.

The Newham-born player joined the Hammers at the age of nine and made his first team debut in the FA Cup at Nottingham Forest last season whilst still a first-year scholar.

In pre season he traveled to New Zealand and Germany with the first team, and scored a goal in the 3-2 victory over UC Sampdoria at the Boleyn Ground.

He told West Ham TV: “It’s a great achievement for me. My first professional contract for the Club and to sign for a great Club like this is really good.

“I started off pre-season away with the first team and obviously did quite well there, came back, scored my first debut goal and have just carried on from there. I’m doing well, and I’m just glad it’s come to this.”

← Report: Tomkins to work with under-privileged kids
“I want to prove I can play with the new strikers” →
Click Here for Comments >