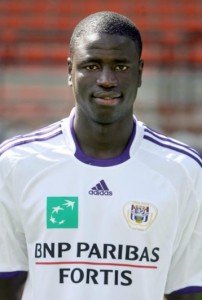 The 24 year old 6′ 4″ centre back who can also play in a defensive midfield role is being monitored by a number of clubs across Europe including Valencia.

Arsenal and Manchester City have been monitoring  the Senegalese  for some time but the Hammers will test  the water to see if they can tempt him to  East London.

He started his professional career in Brussels coming through the youth ranks before joining Anderlecht in 2008.

He  has made 145 appearances for them. The club value him at around £8m but he  could be available on a season loan deal for the right price. West Ham have been known to scout him a number of times in the last six months.

Initially the 6’4″ transfer target was thought to be Raoul Loé who we tried to sign in the last transfer window before we signed Antonio Nocerino but  news coming out of Belgium suggests Kouyaté could be the real target.