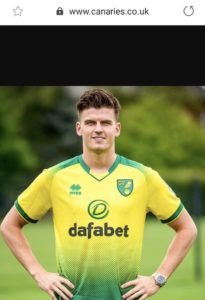 am Byram has joined Norwich City for a modest transfer fee of just £750,000 it can be revealed.

The permanent move will be confirmed this morning by both clubs but the cat is already out of the bag after the Canaries accidentally loaded an image of Byram in a Norwich shirt on to their official website in the early hours of this morning.

Claret and Hugh broke the Exclusive news of the defender departure last night but didn’t reveal his destination. His departure will trim £1.2m off the wage bill annually.

The 25-year-old right-back who joined from Leeds where he made 139 appearances cost the Hammers £4m in January 2016.

The Thurrock born player was plagued by injury making just 36 appearances for the Hammers in all competitions over three and a half years.

Last season he was loaned to Nottingham Forest where he made eight appearances,

We wish Sam all the best of luck in his future career at Norwich.