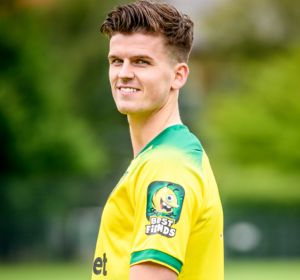 Right-back Sam Byram has become the fourth new addition to newly promoted Norwich City squad this summer. Byram has joined the Canaries on a four-year contract after Norwich paid a transfer fee of £750,000.

The 25-year-old has already met up with his new teammates on their pre-season camp in Germany.

Speaking to canaries.co.uk, Byram said: “I’m delighted. It’s all happened quite fast and it’s been a quick turnaround. There’s been a lot of travelling to get out here to Germany but I’m just pleased I’m here now.

“I heard about the interest a week or two ago. Obviously, I wasn’t in the plans for West Ham going forward and I needed a new challenge to go out and push on after last season. When I heard Norwich were interested, I was really interested [because of] how the manager [Daniel Farke] had the team playing last year.

“I had a nasty injury last year and it was nice to finish the season with a couple of games and then this feels like a new chapter, a fresh start.“I’ve just come off the back of a ten-day fitness regime out in Switzerland. We were doing triple sessions so I’m at a good level at the minute.”

West Ham also confirmed the news officially at 8.30 am saying: “West Ham United can confirm Sam Byram has joined Norwich City on a permanent basis for an undisclosed fee. The full-back ends a three-and-a-half year stay in east London, during which he made 36 first-team appearances in all competitions.

The Essex-born defender joined the Hammers from Leeds United in January 2016, playing his part in the historic Farewell Boleyn season. He then assisted the first-ever goal scored at London Stadium, netted by Cheikhou Kouyate in a UEFA Europa League third qualifying round win over Slovenian club NK Domzale in August 2016.

The 25-year-old also started the first Premier League game at the Hammers’ new home, a 1-0 win over AFC Bournemouth, later the same month.Byram spent last season on loan at Nottingham Forest in the Championship and will now continue his career with the Premier League newcomers.

West Ham United would like to thank Sam for his efforts in Claret and Blue and wish him every success in his future career.”