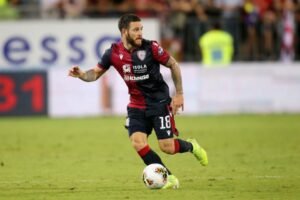 Speaking in Italian he said: “Krunic is strong, I know him and I wish him all the best. Bellodi? We didn’t talk about him. Nandez? To West Ham? No.”

The Uruguay international has featured in 23 games across all competitions for Cagliari since joining Boca Juniors for £16m last August on a five-year contract.

The Hammers had a £25m bid for Cagliari midfielder Nahitan Nandez turned down earlier this week and after the rejection turned their attentions to central midfielder Tomas Soucez who they signed on loan until the end of the season. West Ham will play parent club Slavia Prague a loan fee of £3.8m with an option to buy the 24-year-old at the end of the season for £13.7m.   There is no further interest in Nahitan Nandez by the Hammers.
Permalink