West Ham have confirmed Nottingham Forest’s interest in under-23 left back Emmanuel Longelo but unless the bid is upped considerably there is no chance of him leaving the London Stadium this winter.

The Irons have confirmed the Championship club’s interest revealing that he was wanted on a permanent deal.

However, an insider told ClaretandHugh: “They made a stupidly  low offer and we had no problem in turning them down flat. There’s always the chance they will come back but they will need to up the offer considerably.” 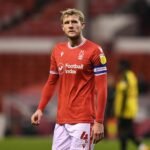 It’s been claimed that a deal may be linked with Forest hardman central defender Joe Worrall moving in the opposite direction but that has not been confirmed at this stage.

The Nottingham-born 25 year old is very much a Moyes-type player, never afraid to go in where it hurts, but the club are unlikely to let him leave this window as they stage a late bid for promotion to the Premier League