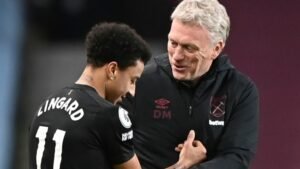 Manchester United look to have finally quashed Jesse Lingard’s dream of joining Irons in the remaining hours of the transfer window.

The Claret&Hugh northern desk was informed late on Monday afternoon the Old Trafford midfielder was still hoping his club would blink first and open negotiations over a permanent transfer to the London Stadium.
The Red Devils, however, remained steadfast in their stance that sanctioning a sale to us would be “bad business” and still view  Hammers as a direct rival for the top four in the remaining months of the season.
United insiders also confirmed to us the loan of forward Anthony Martial to Sevilla last week, coupled with the suspension of Mason Greenwood, who continues to be questioned by police over allegations of a serious sexual assault, further cemented their stance.
United still have Cristiano Ronaldo, Marcus Rashford, Edinson Cavani and Jadon Sancho in the front positions, hardly attacking breadline stuff for the majority of clubs.
But Lingard was informed that unless Newcastle returned late to the table and met their staggering demands for a £13m bonus payment, should the Geordies avoid relegation, the 29-year-old would be staying put in Manchester until the summer.
Lingard spoke to interim manager Ralf Rangnick earlier in the day, in a bid to try and find a solution, but United’s executives would rather keep the Warrington-born player than cede to him linking up with West Ham, despite people close to the situation insisting he still wants to play for David Moyes again.
Things cand always change in the last few hours of deadline day but frankly it would incredibly surprising wre united to suddenly change their attitude
A United insider told us: “Jesse has felt let down every step of the way. United know he still fancies West Ham but they didn’t want to risk it, unless a really stupid offer arrived on the table.
“Jesse would go to Newcastle on loan as it kept his West Ham option open, but United are moving the goalposts again because of the Martial and Greenwood developments. Jesse has been here since a kid but it all seems to count for nothing.”
Permalink