CandH Exclusive: No Irons training for stay at home Dawson

Craig Dawson is unlikely to be seen in the Hammers first team colours for some time to come.

David Moyes failed to give any explanation for his absence from the team beaten last weekend at Wolves insisting he wasn’t injured.

However, Claret and Hugh can reveal that the central defender is not training at Rush Green given his personal issues. 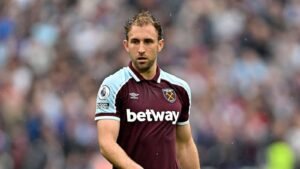 Instead he is remaining at home in the north and hoping he will be able to get the move to Wolves whom, we have learned, have offered a fee of £3 million for the 32 year old who is out of contract at the end of the season.

The Hammers are now faced with a difficult decision on whether to accept the fee from a club who currently represent relegation rivals to the Hammers.

Dawson is keen to make the move it allows him to commute to his home in the north of England,

One comment on “CandH Exclusive: No Irons training for stay at home Dawson”