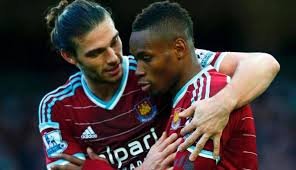 West Ham fans have voted by a heavy majority the time has come to wave farewell to both Andy Carroll and Diafra Sakho.

The injury ravaged strikers have experienced another miserable appearance record this season and the team has suffered a serious cutting edge apart from a spell when a fit Carroll managed to fine the net seven times.

Sakho meanwhile has made two brief appearances and is again believed to again be suffering from the back problem which it was understood had been solved by surgery.

ClaretandHugh asked its followers – among growing unrest – whether the club should get rid of both or one or the other.

And the result was clear-cut. In answer to the question: Should the club get rid of Andy Carroll and Diafra Sakho  56.02 (1089) followers voted YES!

Only 226 voters  (11.63 pc) believed the club should retain the services of both next season.