Posted by Sean Whetstone on October 30, 2016 in News, Whispers 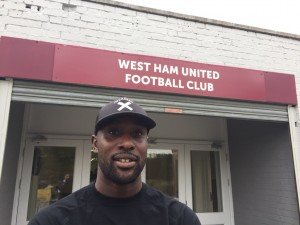 Former Hammer Carlton Cole has returned to West Ham to keep his match fitness.  Cole has been allowed to train with the team at Rush Green to keep himself fit.

The club’s official twitter posted a photo of him on Saturday at Rush Green and we have been told he has been allowed to use the facilities with the club’s blessing.

West Ham fans sung Carlton Cole’s song on at Selhurst Park recently showing he is still fondly remembered by fans. Carlton is now a free agent and will keep fit at Rush Green while he looks for a new club.