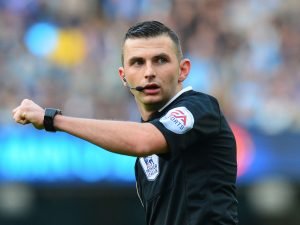 Frustrated Andy Carroll continued to argue with referee Michael Oliver after the game folowing Chicharito’s goal being ruled out on the basis that the striker had handled in the build up.

His case looked rock solid because he was being pulled all over the place by defenders and the ball had no where else to go but down his arm and it was very easy to claim he should have had a spot kick as a result.

Carroll declared afterwards: ” “I tried to bring it down and it hits my hand, but there’s also a push in the back, maybe if the referee gives it things would be different.”

He added: “I thought we played well throughout, of course [Peter] Crouch comes on and scores. We had a few chances, goals disallowed, but for us, it’s a good result.

“I didn’t feel sharp, the ball came in and it was right on the path of my left foot so i just whacked it! it’s only five days I’ve been training with the lads, so not a lot.