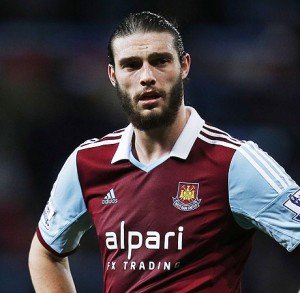 Andy Carroll looks certain to lead the irons attack at Everton tomorrow and insists: “I have enough quality on the floor as well as in the air.”

And ClaretaandHugh’s chief analyst Leroy Rosenior agrees declaring: “He is unfairly labelled as a long ball target man when in fact he can bring players into the game and link play.

“People love to think ion stereotypes but they have got it all wrong as far as Andy is concerned. He really is a terrific centre forward and he’s going to be one hungry player at Goodison.

Carroll is clearly fed up with being stereotyped and said in a recent interview: “The style doesn’t really matter. It doesn’t really affect me. People have got that image of me, just on the end of long balls.

“They have got the image of Sam Allardyce and long balls. It just does not work like that. The gaffer knows he can play both ways and he has shown that this season.

“I think I am capable of doing that as well. I think it is a tag that we have both got that is not justified.”

← Gold takes big offence at Whelan
Song: “I want to be part of the Irons story” →
Click Here for Comments >