Carroll out to bury Flores memories 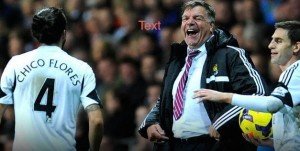 Andy Carroll – in wanting to bury memories of last season’s clash with Swansea – has a far better than even money chance of doing so …given Chico Flores is now thousands of miles away in some Qatar footballing outpost.

The big centre forward referred to the matter briefly when declaring that last season’s clash “wasn’t a very good ending” for him.

You can say that again!  The sight of Flores crashing to the ground and writhing in agony as a trailing Carroll arm brushed his hair was one of the worst sights many of us have ever witnessed in the game.

Flores is now out of sight having teamed up with his former boss Michael Laudrup at Lekwhiya and Carroll said that hopefully he will get a couple of goals this time around and no red card – which would “be even better.”

Hopefully too, there will be no repeats of the official dramas that followed as the Hammers management and board considered their plans to fight the issues involved before eventually having to accept the outcome.

One comment on “Carroll out to bury Flores memories”