Celeb journo lays in to our Sean

Seems our Sean has ruffled the feathers of that well known extremist journalist Rod Liddle (above right) – extreme, in that he manages to find words that suit audiences at both the once upmarket Sunday Times and our friendly readers at the Sun!

Rod’s a Millwall fan and may consider himself something of a humourist but whose main angle seems to be in taking a pop at whatever takes his fancy. 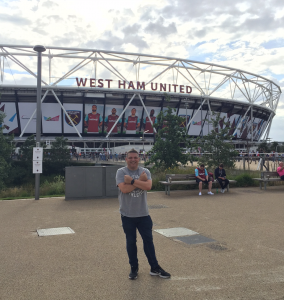 So given that he is a supporter of such a peaceful club (!!!!!) we feel somewhat honoured that he should go out of his way to express his random thoughts on Sean and the London Stadium.

We’re also pleased that he should choose his Sunday Times column rather than The Sun to open up his  rather ill considered attack on our man.

As celebrity journos go Rod is probably around Level C and as is usually the case with these guys he tends to offer a reactionary view of things – that’s what celeb columnists do most of the time.

He took issue with Sean over his account of the events at the London Stadium on ClaretandHugh and elsewhere opening up by remarking that “West Ham are happy to kick the heads of their own throng as was the case against Watford in September.” Err, sorry where did that come from?

He added that there were also attacks on Middlesborough supporters after the goal-less draw between the clubs. Err I think the game ended 1-1 Rod but don’t let facts get in the way of your column.

He of course uses a second hand quote by a Boro supporter to the local Middlesborough local paper in standing up his point.. Hmmm!

Liddle then goes on to claim that three arrests were made, that David Sullivan had announced reports of violence had been  sensationalised and that the same delusional insouciance had affected Sean.

Nonchalence or indifference are better words but perhaps not quite upmarket enough for The Times!

Carefully picking the pieces of Sean’s story that he believes helps his case, he reminds us that our associate editor had blamed travelling fans for coming to an iconic stadium to cause bother.

Then comes the not too well considered pay-off line “that being mental elderly women who hate iconic stadia..”

The problem with all of this is that anybody can say anything to any paper without it necessarily being 100 per cent correct as Rod may remember assuming he can recall his days as a reporter on local papers.

We had a very good example of this when that odd Chelsea Dad chose to put his daughter Victoria in the firing line in another attempt to inflict some damage on West Ham last week and was contradicted by his own nine-year-old.

It may be a good idea to remember that Sean was right at the centre of last Wednesday’s events and that he made it clear any West Ham involved should receive the appropriate treatment. I’m not sure Rod Liddle would have been. If he were we’ll think again 🙂

I  know who we will believe as a result and after all it is next door to impossible to accept that either Chelsea or Millwall fans would ever want to cause trouble isn’t it?.

← Close Goodison after this shocking event!
Why Adrian is still No.1 →
Click Here for Comments >

2 comments on “Celeb journo lays in to our Sean”