Chairman will be a Gooner for a day

Posted by Sean Whetstone on February 28, 2016 in News, Whispers 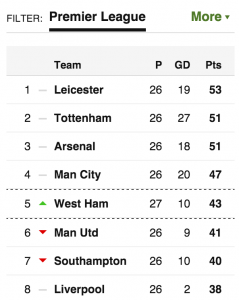 West Ham Chairman, David Gold will be supporting Arsenal just for one day today but only to retain the Hammers fifth place on 43 points.

After yesterday’s win, Gold posted  on twitter“Not at our best today but a great goal from Michail Antonio gave us the three points that took us to 5th in the PL. come on Arsenal. dg”

West Ham leapfrogged Southampton and Manchester United from seventh into fifth place in the Premier League. Chelsea over-came the Saints 2-1  yesterday to put them seventh but Arsenal now need to beat the Red Devils today to keep them in sixth place and 2 points behind the Hammers. A draw will be enough for us to retain our fifth place before we face Spurs at home on Wednesday.  West Ham’s total of 43 points from 27 games is a new Premier League record for the Irons.

4 comments on “Chairman will be a Gooner for a day”