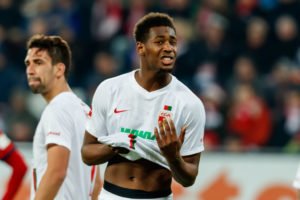 Slaven Bilic is expected to move in on Reece Oxford should he become West Brom boss as reports emerge that the Hammers defenders move to Augsburg is on the brink of collapse.

And The Telegraph also reports Middlesbrough are also being linked with the player who is available at around £4.5 million is insisting that any deal with Augsburg includes a standard relegation clause.

The report adds the Budesliga team – who finished 16th last season – are refusing to give in to the demand-  thus making the deal unlikely.

They have no trouble with the fee but Bilic – who gave the player his first team debut against Arsenal in 2015 and appears to be on the brink of being appointed at The Hawthorns – is watching developments carefully along with Boro .

Oxford played just eight times for Augsburg after arriving on loan last season and enjoyed mixed fortunes according to some who watch the team regularly.

Manuel Pellegrini has excluded him completely from his plans suggesting that h should now move on with the player agreeing that is the best way forward.

The deal with the German outfit looked nailed on to go through until Oxford and his advisers decided to insist on the relegation clause which could now see the deal fall through with the player instead starting the new season in the Championship.

The player has two years left on his Hammers contract and the club are keen to sell with Bilic looking the most likely buyer should he be appointed  at the Hawthorns.