Posted by Sean Whetstone on August 6, 2019 in News, Whispers 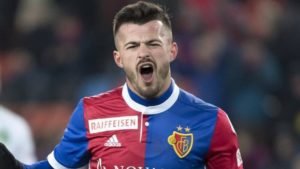 FC Basel’s progress in the Champions League qualifiers has made West Ham’s task of signing Albian Ajeti ahead of Thursday’s transfer deadline a very difficult quest.

West Ham, alongside West Brom and Brentford, are attempting to sign the striker the 22-year-old striker this week.

The striker netted a goal away at PSV Eindhoven as the Swiss side beat the Dutch giants on goal difference to progress further in the Champions League.

With Basel in with a chance of playing in the Champions League group stage, it seems increasingly unlikely that Ajeti will take a decision to leave before Thursday’s transfer deadline.

Champions League group stage football would also give Basel a massive financial boost way beyond the transfer fee they could receive.

Basel are due to face Lask in the first leg of the third qualifying round tomorrow night at 7 pm local time so it will be interesting to see if the striker is in the starting lineup.

4 comments on “Chances of signing young striker slipping away”