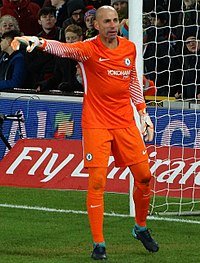 West Ham – contrary to reports – will be unable to woo  Chelsea second string keeper Willy Caballero into the London Stadium.

Various reports have emerged claiming the Hammers boss Manuel Pellegrini was keen to take his former Manchester City stopper as a replacement for Adrian who will be leaving in the summer.

And although the London Evening Standard claims the keeper is out of contract next month, we have been told by a Hammers insider that in fact the Blues have an option on him until next summer which they have now exercised.

That leaves the Hammers still hunting for a back-up goalkeeper with a senior source in the Hammers telling us by e mail: “Chelsea have used their option to keep him another year, so he is not available.”

Hammers academy prospect Nathan Trott is seen as the future Hammers No 1 but is in need of games and will be sent out on loan to a Championship club next season.

Our source added: “The plan is to loan Trott and we need second and third choices for the training ground and to travel. Trott could be first team keeper in 2/3 years, but needs games now.”