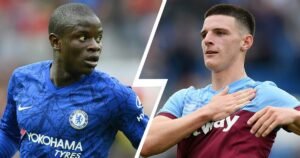 Chelsea appears to be ready to sell N’Golo Kante this summer it has been widely reported.

Real Madrid are set to revive their interest in N’Golo Kante this summer and could make an offer of £72million for the Chelsea midfielder.

The La Liga side are eager to bolster their midfield options and have a longstanding interest in Kante dating back to when he was at Leicester.

That sale could prove extremely bad news for West Ham with Frank Lampard a big admirer of Declan Rice as a replacement.

Although West Ham has repeatedly said their star asset is not for sale and would be the very last player they would sell, money talks!

A bid of over £70m for Rice from the proceeds Kante’s sale could be an offer too good for the Hammers to turn down.

Club insiders expect a formal move from Chelsea on Declan Rice if N’Golo Kante is sold.

2 comments on “Chelsea sale is bad news for West Ham”