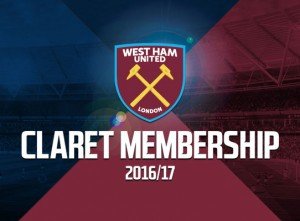 Claret Members who have paid £40 to join up are upset that West Ham’s new official partner Thomas Cook is offering match day tickets to anyone from £119 per person as long as they stay in a hotel.

Claret members have been frustrated at the small number of tickets in the ballot process after the capacity was restricted to 57,000 instead of the promised 60,000. This has meant as little as 2,000 tickets available for the ballot process for Premier League games.  Claret members were also promised first access to ticket trader tickets from season ticket holders who can’t make the match but that scheme has still yet to be launched two home games into the Premier League season.

Despite these restrictions Thomas Cook is freely offering tickets in Block 125 for all home games this season starting at £119 and rising to £199 per person.

The Middlesborough game on the 1st October is being offered at £129 per person.

← Away fans will have to stay put at London Stadium
Brady’s latest threat so wrong! →
Click Here for Comments >

One comment on “Claret members upset with Thomas Cook offer”