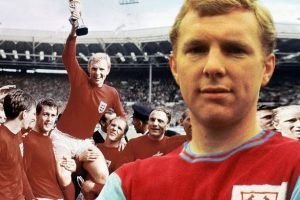 Bobby Moore will be remembered by West Ham United this weekend as the club prepares for the 25th anniversary of his death.

The club will mark the anniversary of Bobby Moore’s this Saturday away at Liverpool as well as the next home game at the London Stadium against Burnley. Away fans at Anfield will mark his passing in Liverpool with the club planning a surprise to those who have made the trip up north.  There are also a number of events and memorials including Moore’s family when West Ham play next at home on 10th March.

Moore remains an icon of English football after lifting the World Cup for his country in 1966 and holding 108 caps for England.

Moore was born in Barking on April 12 1941 and was also schooled in the area. It seemed only natural that he joined West Ham, in 1956 and made his debut against Manchester United two years later. The central defender never looked back after that first game, as his composure and anticipation made him a stand-out prospect as a young player. Moore’s form at the Boleyn Ground earned him a first call-up to the England squad in May 1962 in preparation for the World Cup in that same year. He made his debut in a friendly win over Peru in Lima.

Just a year later, Moore captained his country for the first time following the retirement of Johnny Haynes and injury to Jimmy Armfield in a victory over Czechoslovakia.Moore returned the armband to Armfield, but his poise in the role had been noted by Alf Ramsey, who made the West Ham player his permanent England captain in 1964.

Moore lifted the FA Cup for West Ham in the same year after they defeated Preston North End 3-2 in the final at Wembley.

A year later, Moore was picking up the European Cup Winners’ Cup at Wembley after the Hammers defeated 1860 Munich in the final.

The year 1966 needs no introduction and the 4-2 World Cup Final victory over West Germany requires little further description, other than to remember the iconic image of Moore being presented with the Jules Rimet trophy by The Queen.

← Vote of no confidence in social club leadership
Video: Razzle Dazzle them! →
Click Here for Comments >