West Ham are becoming more confident that Tomas Soucek will stay at the club beyond the summer transfer window.

The Irons midfielder has been in a stand-off with boss David Moyes over the terms of his new contract. 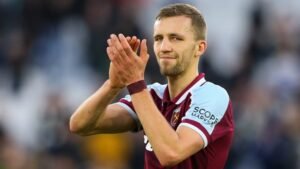 He has yet to commit his future to the club but there was a feeling earlier this summer that he would leave if the right offer came in after the manager refused to give his a contract imptovement.

This allegedly led to bad cloood between the pair and at this point there has been no bid for the Czech and West Ham are growing in their belief that he will remain at the club.

We are now being told that Soucek is not minded to push for a move as feelings appear to have become calmer betweeen manager and player and the Irons will not actively attempt to sell him.

There has not been an offer from an elite club, and the sides linked with him all finished below the Hammers last season.

David Moyes has readily admitted previously that every player has his price but the Irons value Soucek highly.

The Irons have had midfield issues when it comes to numbers but they have signed Flynn Downes from Swansea, and Declan Rice is also set to stay for at least one more season.

8 comments on “CndH Exclusive: Peace growing between manager and player”