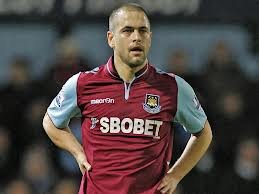 West Ham’s favourite son Joe Cole appears to believe the fans who staged a ‘Big Sam Out’ protest on the Hawthorns terraces had the right to make their point!

The manager has come in for serious criticism over recent days and the fans unfurled a banner reading: ‘Fat Sam out’ as the Irons sunk to their their fourth consecutive defeat.

Cole – who appeared as a second-half sub against the Baggies – had a good view of the banner – and told Sky Sports: “It was an emotional response from the fans. The fans have an opinion and they voice their opinion.

“But the gaffer’s been in the game long enough. I think he’s probably dealt with situations like this before.

“No excuses, the league table never lies, you are where you deserve to be.”

And commenting on the syle of play which is probably at the bottom of everything, Joe added: “The style of play has been criticised at times this season, sometimes rightly, sometimes wrongly.

“But we’ve got to stick together. Until we’re mathematically safe and the club can start planning for next season, we’ve got to be fully focused.”