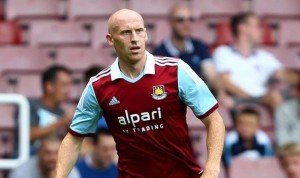 James Collins has landed a deal which will earn the central defender around £3 million over the two years of his new deal.

The value that manager Slaven Bilic has put on the 32 year old was happily agreed by the board when they decided to rush through a new deal for the Hammers loyalist.

Collins – who has now been at the club for nearly seven years over two spells has lifted himself from fourth choice central defender to be battling with Angelo Ogbonna for the other shirt alongside Winston Reid when fit.

His deal works out at around £29,000 a week and is likely to keep him at the club until the end or close to the end of his playing career.

Reid is likely to return to the side for the 3rd round FA Cup Tie against Wolverhampton Wanderers – a game which should also see the return of Victor Moses.

9 comments on “Collins deal: The finances”