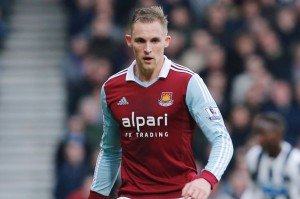 Former Hammer, Jack Collison has pulled the curtain down on his football career following his long battle with a knee injury.

He will now focus on a a coaching and media career after dislocating a kneecap with the Hammers at Wigan in 2009. He has played just  22 times in three years.

Collison told the Sun: “The nights I wake up in pain, or the mornings where I struggle to walk, will be a constant reminder I was lucky enough to play the game I love.”

“I still wake up some mornings feeling good and think ‘one more try’.

“But that would be unfair on myself, my fellow pros and my family.”

“I want to bow out with some pride intact.”

Collison will study for his Uefa A license this summer and work in the Posh academy coaching. He will also embark on a journalism course.

Jack last night promised ClaretandHugh that he will appear on the CandH section of  MooreThanJustAPodcast – hopefully on Monday evening.

← Injures but Irons to field strong line up
“When you sing my name, I feel big, I feel strong” →
Click Here for Comments >

4 comments on “Collison announces his retirement”