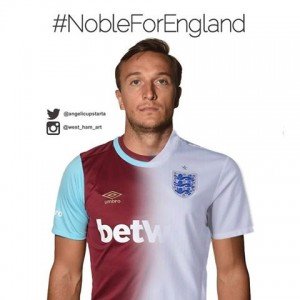 Former Hammer Jack Collison has said that Mark Noble’s call up for England should be a no brainer and says if he isn’t called up there is definitely something going on.

Speaking to MooreThanJustaPodcast as part of the Claret And Hugh interview series,  Jack told the West Ham podcast:

“Nobes has been fantastic, he has probably played under seven or eight managers now and he has always been a regular and even more so this season.  After his goal (at the weekend) it just shows that with a little push over the line he might get an England call before too long, you never know!”

“It’s a no brainer, especially with the type and brand of football West Ham are playing at the moment. I think he would slot in there very easily considering that midfield is a very competitive place to try to get in with the likes of Dele Alli and Ross Barkley. I think Nobes has shown he can hold his own at any level with the amount of games he has played and the way he is driving West Ham forward at the moment and if he doesn’t get a call up there is definitely something going on there!”

The full Jack Collison interview can be heard on MooreThanJustAPodcast below

9 comments on “Collison: Nobes England call-up is no brainer”