Collison to return to West Ham 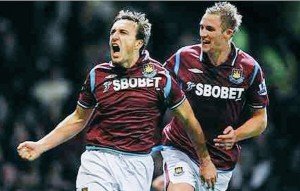 Former Hammer Jack Collison will return to the Boleyn Ground one last time to play in Mark Noble’s testimonial on 28th March.

Jack tweeted “Honoured to have been asked to play in the Mark Noble testimonial.. Can’t wait to go back to the Boleyn”

Earlier this week Barry Fry has revealed that Jack Collison’s playing career is coming to a sad end but that his managerial career is ready to take off at Peterborough United.

West Ham released him with a heavy heart at the end of last season and although Ipswich Town handed him a short-term contract in September, he injured his left knee in a practice match and was unable to make a single appearance for Mick McCarthy’s side.

Fry has revealed on MooreThanJustAPodcast that it only remains for Jack to make the final decision to retire. He explains the player has seen consultants and reveals all the medical advice he’s received.

← Lawro has lost the plot yet again
Fall of Krays proving a hit! →
Click Here for Comments >