Posted by Sean Whetstone on October 19, 2020 in News, Whispers 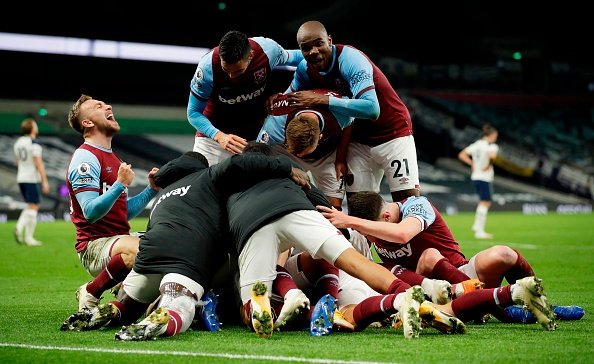 Hammer Michail Antonio was substituted in the second half in the 77th minute to be replaced by Andriy Yarmolenko.

Antonio was later pictured celebrating with his fellow teammates on the Spurs pitch with his hamstring heavily strapped with ice.

Antonio has suffered from hamstring injuries a number of times and we await an update from the club on his condition.

ClaretandHugh have been told that the ice strapping is a standard procedure and not necessarily a cause for alarm.

Seb Haller was missing from yesterday’s matchday squad leading to all kinds of conspiracy theories on social media after the teams were announced at 3.30 pm on Sunday.

A club source explained that Haller trained yesterday but suffered from a small knock so did not make the bench today but his injury is not expected to be long term and he should return to the matchday squad for Manchester City.

With the next game in less than six days time, David Moyes will be hoping both his forwards will be fit in time to face tenth place Manchester City.

← Spurs watchalong as Lanzini ruins their day
Declan: “It just seemed like it was meant to be “ →
Click Here for Comments >