Confidence is high for Aston Villa away win

Posted by Sean Whetstone on September 14, 2019 in News 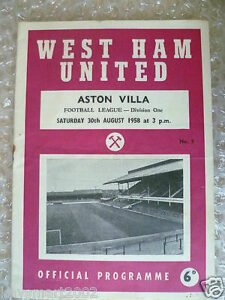 West Ham have won 40 games, drawn 32 and lost to Villa since they first played each other for the first time in 1913.

The Hammers biggest win over Villa came in August 1958 at Upton Park with a 7-2 victory.

West Ham are looking to secure back-to-back league victories against Aston Villa for the first time since January 2006, having beating them 2-0 in their last meeting in February 2016.

West Ham’s return of seven points (W2 D1 L1) from their opening four Premier League games is their best start to a season since 2012-13, when they also won seven points under Sam Allardyce.

West Ham striker Sebastien Haller has scored three goals in three Premier League games this season and has been involved in 21 goals in his last 25 top-flight appearances across spells at Eintracht Frankfurt and the Hammers (15 goals, 6 assists).

One comment on “Confidence is high for Aston Villa away win”