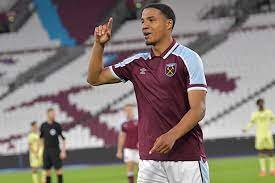 West Ham’s under 23s strode into the last 16 of the Premier League Cup with a hugely convincing 3-0 victory against Exeter this evening.

The lads are enjoying a fabulous season at the top of Premier League 2 Division One and now moving closer to a real assault on the Premier League trophy.

They were hugely convincing tonight dominating the first half and scoring their three goals in the second 45 minutes.

The win means they have collected 10 points from five played and cannot be caught in second place in Group F.

The goal of the night was the second on 77 minutes when Armstrong Okoflex ran almost the length of Exeter’s half before playing a one-two with the Mipo Odubeko and slotting home from 12 yards.

Maybe this youngster is part of the reason David Moyes is in no hurry to sign a back up striker to Mikey Antonio!

Earlier Harrison Ashby’s free kick may have taken a deflection before hitting thre net for a goal on the hjour and the scoring was completed by the impressive Thierry Nevers after being played in by Dan Chesters.