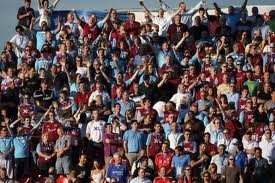 Tony Cottee makes no apologies for declaring that the fans are responsible for the West Ham footballing revolution of 2014!

TC is no rabble rouser but lays out his logic quite simply after a 2013-14 season which depressed him as much as any Upton Park regular.

He believes that after the fans made their feelings known at the end of last season a terrific piece of collective teamwork kicked in which has sent the team on its most exciting season in many years.

He told ClaretandHugh: “There’s no sides to be taken here but I am convinced that had the fans not reacted to what we had been watching last season nothing much would have happened.

“They have the right to do what they did. Why? Because they are the most important people in any club and they made it clear that enough was enough.

“Then a chain reaction set in. The two Davids heard loud and clear and acted fast, Sam Allardyce was told what was wanted and he told the players after some great work in the transfer market. Everyone got the message

“It’s the way it should work…everybody was told what had to happen and everybody responded in the right way. The result has been some tremendous football, terrific results, with everybody feeling proud to be a Hammer.

“These are very good times but first and foremost it’s down to the fans. They spoke up very loudly and from there everybody reacted brilliantly.”