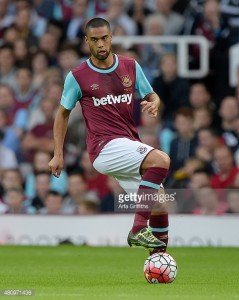 David Gold has heaped praise on Winston Reid for taking his place in the Irons side at Old Trafford despite not being ready to play in such a high profile game.

The co-Chairman had tweeted earlier in the week that the central defender would not be able to make the game as he’d barely rejoined the first team squad.

But when Reece Oxford took a knock in training the manager was left with no alternatives  Reidy agreed to play although he could easily have pleaded he was unable to make the game.

Instead he immediately agreed and Gold told ClaretandHugh exclusively: “It’s a tribute to him Winston demonstrated just how the squad ready the squad are to play for this manager. He deserves a lot of praise for stepping up in the hour of need.”

Reid, however, was forced off after feeling his hamstring and will be checked out by the club’s medical staff but Gold said: “Hopefully it was just a precautionary thing. However, as I say, he deserves enormous praise for stepping into the fray.”