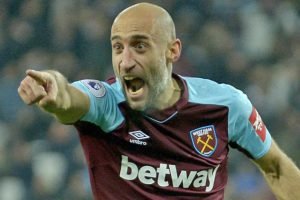 Zaba – still our best right back

It was perhaps the most extraordinary game of the season which appalled and delighted in almost equal parts but what did we learn from a 90 minutes which almost reflected our entire campaign.

Manager Manuel Pellegrini was keen to look – as we all were – at the upside and whatever we may have thought about the overall performance at the end of it only the three points mattered.

However, we can’t be blind to the fact that there are issues and there can be little doubt the manager has probably addressed them in his own mind way back.

Starting from the back it became clear that the best right back in the club is now 34 years old and infinitely more reliable than Ryan Fredericks. 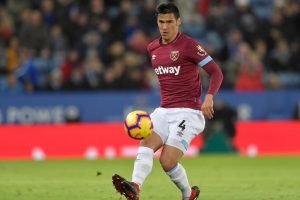 The General – needs to return quickly

Zaba needs to stay until we can find a quality player for that position or until Ben Johnson comes of age because he does look a very good player potentially.

There is also no doubt that the return of Fabian Balbuena will make us a much better team but whether he is partnered by Issa Diop – who as explained in another piece  looks as though he needs a rest.

We learned too that cover for Declan will be needed in the summer as he too saw his performance drop due I believe to tiredness. Between them these two young men have played 66 games this season.

Maybe the boss will go back to Besiktas for his Chilean countryman Gary Medel who was a realistic target in the winter and who seems determined to leave. However, he may also believe that he needs to give Carlos Sanchez a run although the reality is that age is against both men. 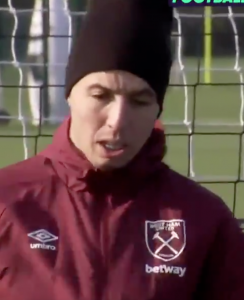 In midfield Samir Nasri was a game changer when he appeared as sub and looks a far better and more creative player than Mark Noble who may be lucky to keep his place in a fortnight’s time.

LIke the two younger man Noble too has had a very busy season and at 32 in May looks in need of a rest after 26 appearances.

We learned too if we didn’t know already that Felipe Anderson needs to up his game over the 90 minutes and that Michail Antonio may still have Pellergrini question marks over him following another subbing.

As for Marko Arnautovic and Chicharito, the jury remains very much out although I believe the manager will remain focused on bringing in Maxi Gomez and Aleksander Mitrovic from Fulham should the club be relegated.

What worries most is that lethargic start to games against the sort of team who came visiting yesterday and it does appear that there may be a sub conscience relaxation in the players minds.

It’s been going on for too long away and invaded home territory yesterday and it maybe the only way to sort it is to bring in players known at this stage only to Pelle and Mario Husillos with an entirely different psyche.

Right now the West Ham Way – where an attitude of “you score three and we’ll get four ” – is alive and well and I’m fed up to the back teeth of regularly reaching for the blood pressure tablets. 🙂