Cresswell got vote of every Irons scout 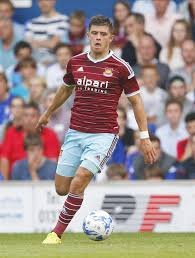 Aaron Creswell has proved himself a top man in an Irons shirt since his arrival at the Boleyn.

And that comes as no surprise given that every scout on the Irons staff recommended the scouser after checking him out .

As a result Sam Allardyce gave the nod and co chairman David Sullivan clinched his signature at £3.5 million up front and £3.5 million on an appearance based clause.

The manager revealed in his Evening Standard column: “”I’m sure Aaron Cresswell, a Liverpool fan as a youngster, will be keen to help the team to a good result at Everton tomorrow.

“The key performance indicators were all looking good when we signed him from Ipswich this summer. Aaron had played practically every game at Tranmere before Paul Jewell took him to Ipswich, where he played 40 games-plus over the three seasons he was there.

“Our scouts and staff who watched him were all in agreement in urging us to go and get him and Ipswich manager Mick McCarthy said he was ready to take the next step. Aaron has done just that, he still has some way to go but he’s a quick learner.”