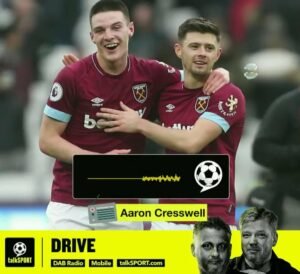 Aaron Cresswell has received abuse from supporters on social media over comments he made over teammate Declan Rice.

Carrying out a contractually obliged interview on Talk Sport yesterday Cresswell was asked about Declan Rice.

“I don’t like to say, I wouldn’t like to see him leave but if he does leave, he could get to another level with better players around him”

‘He’s come in at centre back the last couple of games due to the injuries we have had, he can certainly play either, its a great option but in terms of ability, he’s a fantastic player.”

Cresswell was being honest and said what we all already knew, Rice would become a better player with better players around him, that is obvious to everyone.

His comments have been taken out of context and used against him, he was stating an opinion, he didn’t suggest Rice should leave, in fact he made it clear he doesn’t want him to leave.  He has just stated well-known facts and his treatment on social media by some supporters in the last twenty-four hours seems a little harsh.

✅ “I think as sitting midfield, there isn’t many as good as him in the country.”

💪 “If he does leave, he could get to another level with better players around him.”