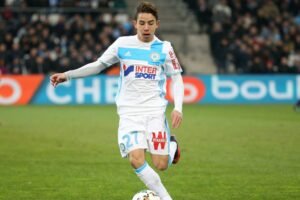 The Hammers and Spurs may fight it out for Marseille midfielder Maxime Lopez should the transfer market get underway this season.

According to The Daily Star the French Under-21 star is wanted by Sevilla but that both ourselves and the Spus would be interested at an asking price of around £10 million.

Lopez, 22, is entering the final year of his contract and talks have stalled over a new deal – thus the price will be much lower than could have been expected along with the clear decline in tramsfer market values given the current situation

Sevilla had an offer of almost £14m rejected by Marseille in January and look certain to renew their interest in the attacking midfielder although the player would sooner ply his trade in the Prmier League.

And it’s that which could easily supply the decisive answer although at this stage the Hammers would appear to have more need of an out and out striker rather than another attacking midfielder.

ClaretandHugh says: Transfer rumours at this stage of things barely warrant the word rumour itself. There are too many variables as things stand and it’s probably best to take them all with a giant pinch of salt. However, one thing is for sure. If Lopez- a very promising young player – is available at the sort of figures being quoted here there are going to be some real bargains around generally. Whether the Hammers will get deeply involved remains to be seen and should we do so it’s alreadt well known that the manager likes to go shopping in the Championship and that would be where we’d expect any serious money to be spent this summer.

One comment on “Cut price midfielder may be Hammers option”